Together with Matt Zabriskie, I run React Rally, a community tech conference in Salt Lake City. It happened at the end of August and I’ve been reflecting on the experience ever since.

This was our second year doing React Rally which means I have a baseline to compare it to. The first year everything was new and hard and scary, but the second year the things that were actually hard and scary stuck out more.

I’m not an expert at events or community, but I’ve done this enough to have something to say about what it is like to run a tech conference and what we try to do at React Rally. Some of this is for organizers, and some is just for people who want to peek behind the curtain. It is all obviously my opinion, and you are free to disagree, ignore, mock, etc.

Treat your speakers well. It is basically impossible to err on the side of splurging too much on your speakers. Speakers are the lifeblood of a conference. They put in dozens to hundreds of hours of labor to prepare talks. Most go through stressful travel, leaving home and family to attend and speak. Almost all of them, no matter how famous or experienced, get miserably nervous before a talk. Make them glad they accepted and glad they spoke.

Show speakers you appreciate their efforts, and do everything in your power to make their lives easier. Here is a partial list of things we did to treat our speakers well. We will do more next year.

One theme of React Rally is that the people and the unstructured time between talks are just as important as the talks themselves.

We don’t have Q & A after talks. Something about being handed a microphone and an audience after someone else gives a talk makes it easy to ask terrible questions. If you’ve been to many tech conferences you’ve probably seen a question that boils down to “Hey, do you know how smart I am?” or “Hey did you know you are totally wrong about everything you just said?”

Part of our Treat Speakers Well mantra is making sure they feel respected. Letting them choose how they interact with the attendees instead of being forced into a potentially nerve-wracking live defense of their ideas up on stage in front of the whole audience fits in with that.

We have tons of downtime throughout the day. We encourage speakers, if they choose, to talk to attendees during that time. It is a much more relaxed experience for both parties. The speaker gets to decide if they want to participate, and the attendee gets close interaction with an expert in the field. At React Rally 2015 my team at Kuali had a chance to chat directly with Jeff of the Flow team on some tricky issues we were facing. It was so helpful, and we didn’t have to grill him in front of an audience of hundreds about things only we cared about.

I’ll say it again. We have TONS of breaks and downtime. We did two hours for lunch, and another hour and a half for breaks during the day. We also had an hour and a half of breakfast before the conference started. This is not because we are lazy (although maybe we are kinda lazy). It is because we value unstructured time just as much as structured talk time.

The traditional name for this is the hallway track. Usually it means you skip talks to hang out in the hallway and talk to all the interesting people you meet at the conference. We didn’t want people to have to choose between the talks and speakers we are so excited about, and talking to old and new friends. That is why we put so much emphasis on break time.

We used food trucks for breakfast, which means people are hanging out in line waiting for their food, chatting. We used a food truck for coffee, which has the same effect. Instead of catering lunch, we gave each attendee a gift card and two hours and sent them to local restaurants. We wanted attendees to go out for lunch with a group of people and chat over food of their choice.

We also organized dinner groups the first night of the conference. Attendees could sign up for a style of food and be sent to a restaurant along with everyone else who wanted that kind of food. It was another opportunity to meet people and interact in a structured way that didn’t depend on someone boldly walking up to strangers and introducing themself. 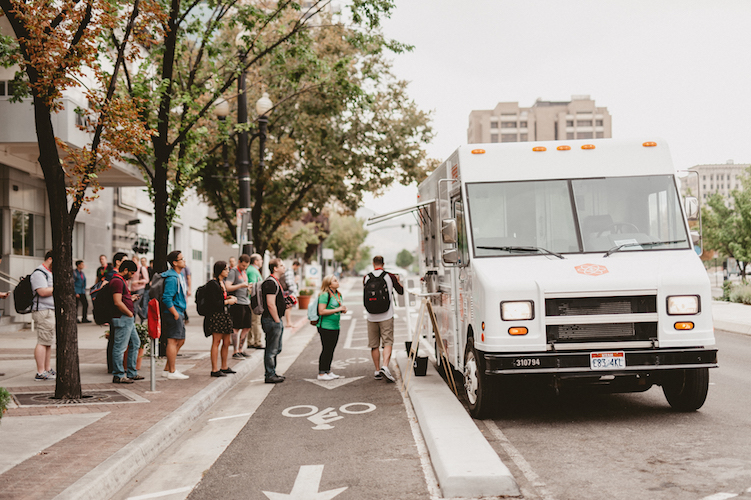 SECRET INSIDER CONFERENCE TIP: Catered food is incredibly expensive. It is not uncommon to pay $50 a plate for a basic, passable but not delicious lunch. It is often the largest single expense at conferences. Lunch gift cards and food trucks were way cheaper and way more delicious than catering.

During the breaks we had food and snacks, but we also added a few random activities (giant Jenga, chalk artists, etc). These weren’t just to be quirky and fun and join the conference perk arms race. The purpose of the breaks is to bring people together and start conversations. I have been to lots of conferences where I didn’t know many people, and so I just stood around awkwardly during the breaks having flashbacks to uncomfortable high school experiences. 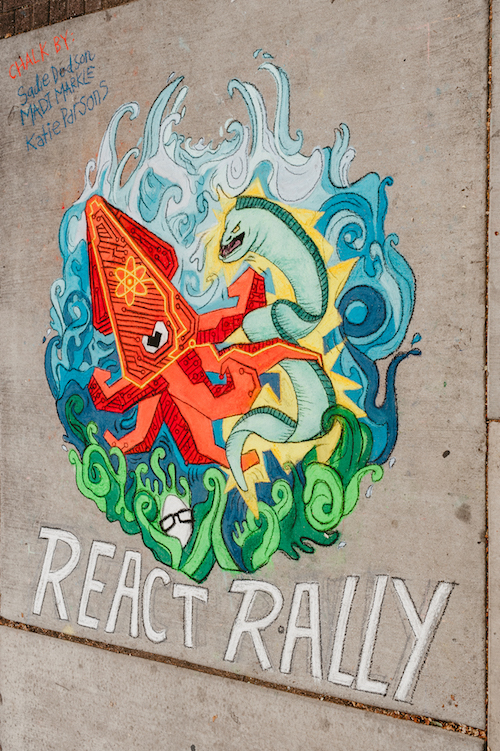 At React Rally we want the breaks to have some kind of activity that will break the ice with people and make it easier for them to start talking, even if it is just “Wow, check out how cool that chalk drawing is!”

React Rally is unabashedly a single track conference. This is a deliberate choice that we feel is better for the attendees and speakers.

Single track conferences create shared experiences. The entire conference is in it together. All the attendees see the same talks, which means they can chat about the same talks in the hallway track. Speakers don’t have to worry about competing with other speakers for an audience. Attendees see talks they might not have chosen themselves. Sometimes the things you don’t know you are interested in are the most interesting.

Multitrack conferences have great things about them (JSConf, StrangeLoop and many more fantastic conferences are multitrack), but for React Rally single track fits the kind of feeling we are trying to create.

If you attend tech conferences, chances are you have enough black t-shirts already. We love our swag (shout out to Gary Wilkerson for designing such great stuff) and are excited to give it to people, but some people are just tired of t-shirts and stickers and socks and patches and all that stuff. That is why we added the option this year to donate swag to charity.

This means we take the money we would have spent ordering swag and instead donate it to Girl Develop It. We also allowed attendees to donate to GDI by paying a bit more for their tickets, and we donated a portion of the proceeds from every ticket sale to GDI. In total, we ended up donating $4,551.15.

Everything Should Be Chill

This isn’t really a specific thing we did, but more of an overarching philosophy. I’d like people to describe React Rally as “chill”. That comes out through the conference size (we had about 420 attendees, and that feels like a chill number), the activities (food trucks, a party in a park with lawn games and some live acoustic guitar, another party playing board games and drinking milk shakes), bringing my daughter on stage, having music playing during breaks, and a bunch of other little things. Life is stressful. Conferences should be chill. 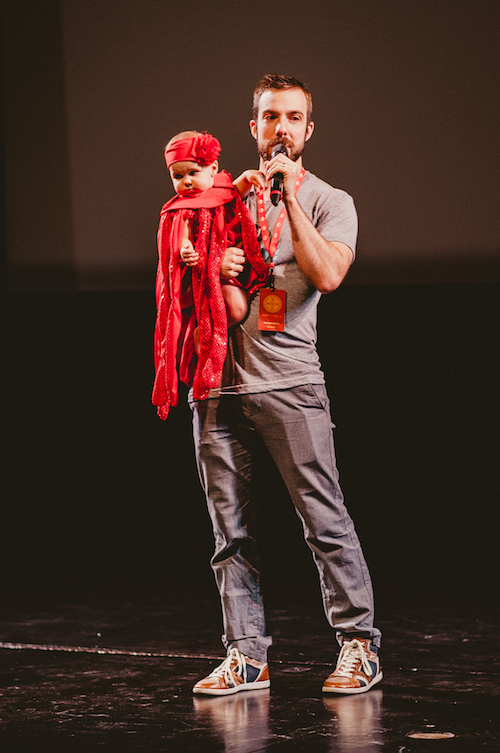 We Still Made Mistakes

We made so many mistakes this year.

There are a bunch more things on our list to improve next year, but despite these mistakes, I’d still call React Rally 2016 a success. We heard nice things from both attendees and speakers. It turns out that people will forgive lots of mistakes if they feel like your heart is in the right place.

Almost every good idea we have is not original to us, but is taken from another source.

The idea to use food trucks came from a 2015 sponsor. The venue we used in 2015 and 2016 came from Mountain West Ruby Conf, and the idea that we could even consider putting on a conference came when Mike Moore asked us to help out with his conference. Joe Eames was an invaluable advisor in 2015 and put us in contact with Sunny and Zero Slope Events, an amazing team who does so much behind-the-scenes work to make a conference run smoothly. Leah Silber wrote a great book called Event Driven that set a standard for responsible and organized event planning that I’m still trying to live up to. The idea of break time and downtime as a focus I believe came from JSConf. I first saw dinner groups at Web Rebels.

There are too many people who have helped in other ways for my brain to ever keep track of. The main point is that we have been inspired by many, helped by many, and if React Rally is anything good at all it is due to the hard work of many, many people. Speakers, attendees, event staff, friends and family have all given something to make React Rally great. Thank you all so much. 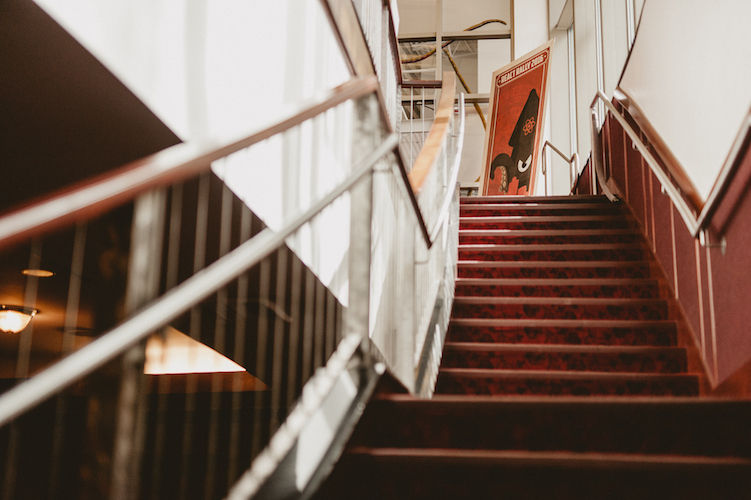